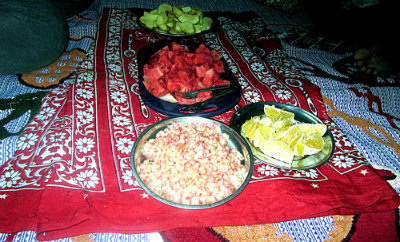 Friends from “our” Peace Corps village in Karnataka, India, make our going back there a celebration. Oh, don’t get me wrong; we were excited to leave, back in 1971 when our term of service was over. Two years away from home and family, with only aerograms and thoughts to keep us connected, seemed so very long, and India was so far from Oregon and Spokane. But during those two years, something of India became ours, and we felt drawn to return – to work and to volunteer and to play and reconnect with friends, again and again.

When we go back, the cloth upon which our food is set out is a red blessing cloth with Urdu script that we can’t read. But we feel its meaning. And the chapattis and palyas, the rice and saaru, the curds and omelets, the chai and biscuits are all so good. Last time Asmath and Fatima made mango pudding. We went in May, and it was hotter than blazes. Ershad and Sabila moved out of their room and let us have the bed under the fan. Sultan stayed home from a wedding to be sure someone was there when we arrived. We met Ashok, who had – unbeknownst to us all these years – been translating our letters to the family from our broken Kannada-in-English-script into Urdu. We visited the poling place where they voted and helped out; it was election day, a busy time. And in the late afternoon we went out to the fields. Sajeed grinned and asked if we wanted to see a magic show – the one our oldest son had performed for them when he and his new bride had recently come to India on their honeymoon.

Before we left, we took flowers to place on the rocks marking the burial place of four of the family who had died, wondering how it is that this family had the strength to carry on through such hard times. 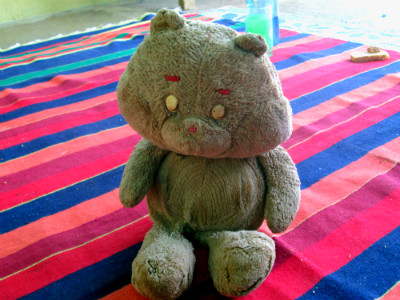 when she visited the village in 1989. We loved its faded fur and the bonds that children create without a language other than play and a sense of belonging and loyalty.

The heat had caused a rash on my neck and shoulders.  Fatima brushed my hair back and gently rubbed on lotion that she knew would heal. Krushid, and later Daulat, sang with me the song they had taught me 43 years earlier, until we were crying together instead of singing.

I put a photo book together for them last week. I’m not sure when they’ll get it, because I’d like to deliver it in person. And I’m not sure when that can happen. But in the meantime, I think of them, and what it means to really celebrate. It surely includes at least some of these: setting time aside to welcome others in, even on busy days; blessing gifts of food whether or not you know the words of the blessing; translating, being a go-between to make understanding easier; making a little magic, even if you’re copying it from someone else; remembering precious times together, and people; keeping loyalty close; singing and crying together; healing hurts with a gentle touch; knowing that love holds over years.

A parrot is a tool? No, but it is a reminder of the #1 top communication tool that helps us really listen to others. Parrots repeat what they hear. We don’t “parrot back” what someone has said, but we do “Bounce Back” for them. We listen and then put in our own words, sincerely, what we’ve just heard them say. That keeps us from responding defensively or in anger. It also lets us make sure we’ve heard correctly, and it lets the other person know we’re listening and want to understand their viewpoint. That changes things!

Instead of saying, “Come on! I was only ten minutes late. It couldn’t have been that big of a deal!” you can Bounce Back what they said: “So when I was late, you were worried that I might not show at all, and you were counting on me to be there to help you set up the display?” Give them a chance to say more. Keep listening and Bouncing Back until you know they feel understood. I keep a paper parrot on my kitchen wall to help me remember to Bounce Back instead of Pounce Back.