I knew that if I died right then, I would be totally embarrassed for the rest of eternity. People would say, “She 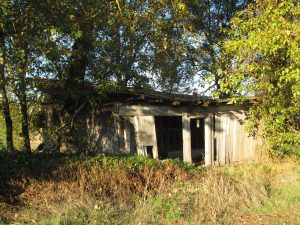 seemed so normal,” and shake their heads. So I made sure we walked facing into traffic and crossed carefully at the blind corner. I couldn’t risk being hit by a car, hauled off to the emergency room in an ambulance, and have them record on my medical chart that I was wearing five pair of underwear when admitted to the hospital.

Did Anne Frank feel as ridiculous as we did? We were doing this to remember her, and that morning in July 1942 when they left their home and walked 2 ½ miles to the factory building on Prinsengracht Street to go into hiding. My 11-year-old daughter Penny and I had read The Diary of Anne Frank and then another book about her. What do you do when you read something like that? We decided not to forget, ever. So we planned the walk, not knowing what else to do. Some July day we would go, like they did, on little notice, 2 ½ miles, wearing extra underwear and extra clothes. We’d take a small bag of treasures.

We made two rules. If anyone asked us three questions, we were captured by Nazi soldiers. One question from a sheriff’s car meant the same. We told 6-year-old Kip the plan. He said he’d go, unless Dad or big brother Bozeb were doing something more fun.

Five Minutes to Get Ready

There was a thunderstorm that July Sunday, but the rain had stopped. I went to Penny and Kip. “It’s time to go into hiding. Margot has been called up and we can’t wait.” They knew what the words meant. I told them to put on extra clothes and pack a small bag. We set the timer for 5 minutes. Then we walked away from our home.

Neighbor Casey drove past us, then slowed down and called out his pickup window, “You all right?” One question. We were quick to answer, “Fine, thanks.” He waved and drove on, but I wondered if we looked a little like a woman and two kids on the run.

We crossed over to the old highway, and school friends called from their porch, “Hi, Penny. Where are you going?” We knew they’d wonder more: Aren’t you hot in all those clothes? Where are your bikes? We didn’t give them the chance.

“Did you hear the thunder this morning?” we asked.

“Well, we better get going. Have a good day.” They waved. We smiled.

We walked on and talked about what if they had been real soldiers or people who would tell soldiers. About why people told or didn’t tell. We talked about Kip’s toes hurting because his shoes were too tight. And that all of Anne’s clothes got too tight before the end. Kip said they should have sat in different churches for a while to trick the people who thought they were Jews. And why were people mean to them anyway? Did we ever have a war at our house? Would we ever really have to go hide somewhere? Why don’t people just do mediation instead of wars?

We talked about being sweaty in all our clothes. Kip asked why we wanted to do this anyway, and if we have to walk all the way back home too, aren’t we going farther than they did? I told him we’d rest at our hiding place before we started back. I said nothing about having already made plans for our return trip home.

“Can’t that tree be our hiding place?” he suggested.

“No, we’ve got to make it to the old fruitstand. That’s 2 ½ miles exactly.” I had gone that morning and clocked the mileage to the ramshackle building. I had also asked Bozeb to come pick us up there, and had added that if he wanted to, he could tell the kids that their ride home was really a train heading for the concentration camps.

As we approached the fruitstand, it started raining. We could see boards, broken glass, and garbage bags lying helter-skelter on the dirt floor, but it was dry so I started in.
“We can’t go in there, Mom. It says, ‘No Trespassing,’” Penny observed.
“What does that mean?” Kip asked her.
“You know. Don’t come in here or you get in trouble.”
“Then let’s go back to the tree.”

I knew Bozeb wouldn’t find us at the tree, and that no one would care if we got in out of the rain for a few minutes. I went on in, and the kids reluctantly followed, but I was a little uneasy doing so. I hadn’t noticed the sign that morning. Could a passing driver spot us – the woman and two kids on the run – entering the old building, and call someone? I pushed the thought away and suggested that we show each other what was in our bags. I kept my eye out for Bozeb.
Kip opened a small paper bag and showed us a shell, a nametag necklace, his Pirate’s Gold badge from school. Penny unpacked Mr. Bearly, her blanket, her water bottle, the extra socks and underwear she hadn’t put on, her Bible. I showed them my library book, photo album, a note from Dad, and the bag of candy I got for my birthday. I was reaching for the apples when my hand stiffened with shock.

A shrill, long piercing police whistle shot through the fruitstand. A booming voice yelled at us, “Freeze!” Penny screamed and clutched me. I couldnt see anyone, but in that moment of jumbled thoughts the “No Trespassing” sign was blurred with a feeling that something had gone wrong. A dark green uniform flashed into my line of vision. My legs were shaking as I felt Kip huddle tightly against my side. Then Penny’s grasp slowly loosened as she said quietly, “Oh, Bozeb, it’s you.”

Was It Just a Summertime Game?

I should have known. He was a drama student. He answered shyly, “Yeah. I was going to say you were under arrest, but you looked scared…” He walked up to us with gentle steps and smiled. “The van’s over there. I guess you didn’t see me drive up?”
“Why’d you do that, Bozeb?” Kip asked. “That’s not funny.”

I couldn’t let him take the blame. It was planned, I said. Just better than I thought. We headed home, and then laughed at ourselves.
I don’t suppose we’ll ever do it again. Was it just a summertime game? Our lives did not depend upon the secrecy of the old fruitstand. Bozeb was not coming to lead us to the death camps. We had laughed in the end, not died. And I had only really worried about being caught dead in five pair of underwear.

But we had asked some questions. We had thought again about a girl who never got to grow up. And we remembered that they had worried – about being caught… about death. We didn’t want to forget that, ever.