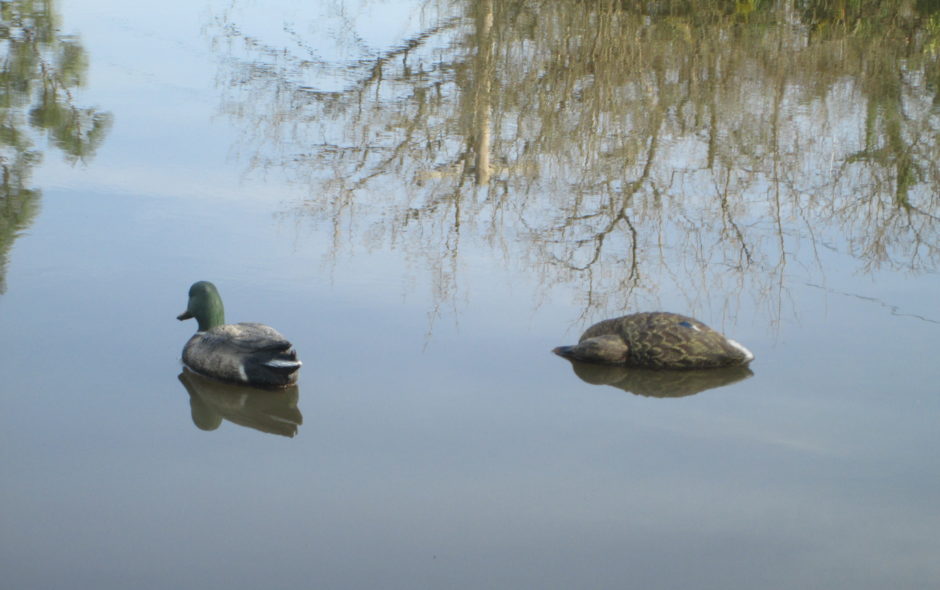 We returned from a conference to find heavy rains had left so much flooding at home. Wayne and I, and son Kip, spotted a distressed Mallard duck in the field across the road from our house. The rains had created a small pond where the male was gently paddling back and forth, keeping vigil over his mate, which had obviously recently died and was bloated, floating in the pond nearby him. I had learned about the Malabar Gray Hornbill when we were in India – how  they mate for life – and heard that in devotion to its mate, the male brings food to the nesting female and young. But I didn’t know that a common duck would feel that kind of bonding and devotion, even staying near its mate at the time of death, as this one was doing. Watching him, I soon realized that he was no longer “common” to me, but quite amazing.

The duck was still circling around its dead mate the next morning when I went walking, so I stopped and talked to it through the fence, then went back to the house for my camera and took some photos. I thought our kids would want to know what I had learned about the Mallard duck’s habits and loyalty. Somebody said one of the kids was out duck hunting that day, but, well, the others might want to know, and probably he would too. Before I walked on, I sang to the duck, and I hoped it somehow understood that it must leave, take care of itself, and get food.

I didn’t want to find it there on the third morning when I went walking. But not knowing what I would see, I took a small bag of Cherrios with me … just in case the duck was still there. Sadly, it was. I could hardly imagine how it was surviving. I walked around the fence at the end of the field, and doubled back to the pond, where I tossed Cherrios out onto the water, some close enough for the duck to scoop them up, I was sure. But it seemed distracted, uninterested. Or perhaps it was just entirely focused on its mate. About then Kip came jogging along.

I guess there’s always something to learn, and be surprised by!