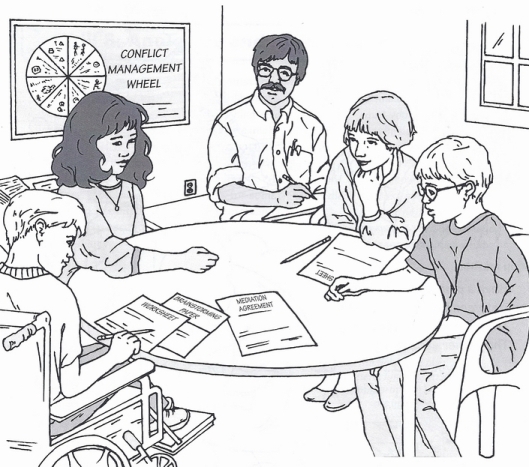 First, the wonder. I’ve worked with peer mediation in schools for nineteen years. I am amazed, but no longer astonished, at what I see kids do when we give them the tools. I attended a conference at about year four. The presenter said mediation was too advanced a skill for the elementary school child. I didn’t know that when I began training nine-year-olds and found they could do it. They had the same empathy, desire to help, creativity, and commitment I saw in the seventeen-year-olds. Parties came to the table with sour faces and locked-in positions, and left grinning and feeling like heroes. After coaching hundreds of mediations, I know without a doubt that kids make it work.

Wondering? Sparking curiosity is at the heart of mediation: What’s the deal with that person? Why don’t they get it? What’s their story? Could there be another solution? Students look at another’s reality, tell their own story, work hard, and discover options they never knew existed. I’ve seen racial issues melt as bilingual mediators put their language skills to work, sifted through what really happened, and helped the parties find their one word solution. I’ve seen a young woman stand in her own strength against sexual harassment with the power of a signed agreement in her hand. I’ve seen crazy, complicated solutions devised that my brain would never have stormed in a lifetime, created by youth excited to carry them out. I’ve watched mediators wonder at struggles their classmates deal with outside of school, and give support. They “bounce back” (paraphrase) at home, and mediate in the park. After being to mediation twice, a boy prone to fighting was overheard threatening a classmate: “You better knock it off, man, or I’m gunna take you to mediation!”

Yet I return to wondering: Why don’t we give every school child this opportunity? Why don’t educators, mediators, and students team up and make it happen? I believe kids learn problem-solving by doing. They deserve to experience an alternative to the violence of their nation’s way of dealing with conflict. In turn, they will be global networkers, sharing the sanity and power of humane, just problem-solving, instead of violence.

We found a bird’s nest under our apple tree, woven entirely of mule hair. Utterly beautiful engineering! Martin Luther said we’d die of wonder if we just understood a grain of wheat. Walt Whitman said sextillions would stagger over the miracle of a mouse. If only we could see the miracle in a mouse! Or an apple tree. Or a mule’s tail. If only people could see the miracle of kids mediating, they would stagger in wonder! And the world would change.

© Kathy Beckwith 2011 (written for Oregon Mediation Association’s call for essays: This I Believe)