But let Ron tell you himself.

I asked Ron Storey if I could include in my “Ponderings” the email he sent me after he read PLAYING WAR: A Story About Changing the Game. I shall not forget what Ron shared, and I think you’ll want to ponder his story too. The power of empathy in a child’s life must never be under-estimated. Nor should we forget how it is that a child learns to understand – through stories shared – what life holds for others. Here is Ron’s email:

A book arrived on our front porch today. At ease in my big lounge chair I read it completely with such pride in the author; with memory of the impact Kathy’s book, “A Mighty Case Against War”, had on me; and with a wish that I could somehow sit down with Kathy and tell her what other memories this latest book stirred.

Perhaps enough that I try to briefly explain.

When I was a child the game most of my friends and I played was ‘Cowboys and Indians’, not ‘Playing War’. The rules were similar. Of course the cowboys were supposed to win because that’s what happened in most western movies we saw at the local Pix Theatre. We often walked to the ‘picture-show’ for a Saturday matinee. All movies were black and white. It cost a dime. It was in the late 1940’s.

With sticks and sometimes a gifted cap-gun for the cowboys and bows and arrows made from a neighbor’s willow tree and with string from a collected ball of string, the battle would begin. It turns my stomach a bit now to remember the challenges to “play dead” and the almost dutiful killing of all of the Indian ‘bad guys’, or; if a kid playing an Indian got the upper hand they were to ’scalp the white man’.

Then when I was 8 or 9 I learned that my grandfather that I never met had been half Cherokee. He and my grandmother, with two small children in tow, all in a small wagon, had followed the Cherokee nation from Missouri to Oklahoma in the hopes of some free land. Grandpa’s sister wouldn’t admit to the heritage of Cherokee blood so they were denied land and they had to pack up and make the long return trip back to Missouri in that wagon.

About that time I was also told about the horrors inflicted on American Indians by the U.S. government forcing them of their land; of the many massacres of Indian villages; of the abduction of Indian children who were placed in “Christian” schools to be raised and taught the “white way”; of the suffering and death of so many Indians from Small Pox, Measles, and so many other diseases brought to America by the ’settlers’. None of this was spoken to in school history books. Most of my friends at school didn’t believe me when I would tell these stories. But I never played Cowboys and Indians again. Nor did my children play war or Cowboys and Indians when they were young.

But it is no longer an issue of just “Playing War”, or “Cowboys and Indians”. The violence on TV and in the movies and in video games is no doubt twisting the minds of our youth. During a discussion of this some time ago our friends said they weren’t concerned about this at all because their kids are smart and they know its all make believe. They believed that; “All of that violence isn’t really real, so seeing it doesn’t affect behavior at all.” I reminded them of the hundreds of thousands of dollars paid by big businesses for TV advertising because they ‘know’ it can change the behavior of those who see it. This is truly a real and current danger.

I ramble Kathy. I just want you do know how much I appreciate your contribution to our society and how much I admire and love you as a friend. Thank you!

And let me add a little more about Ron. When I asked him to share a little about himself, he said he’d be pleased if others would report these things about him:

That in my 79 years I have lived a mostly useful life. That I was a good son to wonderful parents, and a good parent to wonderful children. That I was a good husband to Beth. That as a Division Manager for the Bell System and owner of a small business for 38 years, I was a servant manager who helped employees improve in character as well as in fortune. That as a loaned executive to the Carter Administration I made a meaningful contribution to our country. That as a member of the Board of Directors of Friendly Water for the World I was generous with my resources and my time and that I did help improve lives and save lives in Africa. That above all, I did my best to live a Christlike life exhibiting a love of God and a love of my neighbor, and that I will leave this earth a bit better for my having been here. 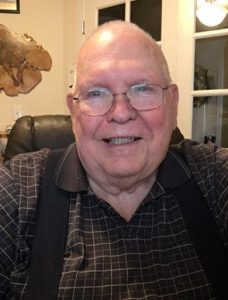 Thank you, Ron. You are indeed making this world better through your life – your compassion, your courage to speak and act and write, and your willingness to share your wisdom, and your story.  – Kathy