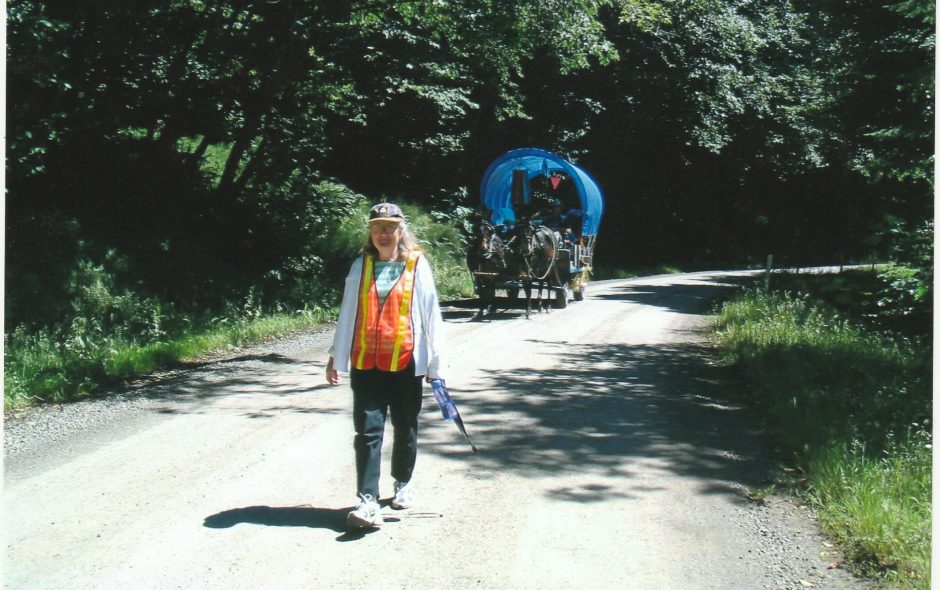 Sometimes an idea captures your fancy and you can’t let it go. That’s what happened with me and the “Salt March to the Sea.” This Spring I watched the videos of a PBS Series on nonviolent action – “A Force More Powerful.” I was reminded that it was 75 years ago that Gandhi protested British rule with his world impacting Salt March to the Sea, at age 60. I began to wonder if it could be done here – while I was still 60 – not to impact the world, not to protest, but to ponder “a force more powerful than violence.” I felt I needed to think about peacemaking and be renewed and encouraged by stories of others who chose nonviolence.

The route was set, and 5 days – June 29 through July 3 – were marked on the calendar to walk from our home outside of Lafayette to the Coast (Whalen Island), a total distance of 68 miles. Wayne offered himself and 2 mules to be the “support” crew by driving the mule wagon to carry our camping supplies, food, etc.

Seven of us walked all or some part of the journey, and each evening when we stopped, we told stories of nonviolence in action, and retold each other’s stories from the night before. We heard how conch shells and brass bells kept missiles out of a village in India, how a blueberry farmer turned complainers into supporters and friends, how Tibetan monks used forced interrogation papers to make paper airplanes, how pussywillow branches calmed stressed college students, how baskets of cats fooled Nazi guards, how Myth Busters dispelled rumors and riots, how an African refugee camp became a protected home place, how moving from anti- to pro- brings new energy. We read about Gandhi. And at journey’s end, I celebrated by reading aloud for the first time, my new picture book, Playing War.

Where there weren’t campgrounds, families offered space for us to camp. People stopped their cars along the way and wished us well. A biker pedaled alongside the wagon. Others waved from their yards or the cabs of their logging trucks. And one day, we had only the quiet of a narrow road through the woods and birdsong as company. The route we took was surely one of earth’s most beautiful pathways — farmland, woods, wild flowers, riverway, waterfalls over rock and fern, and then the sea.

We each have a tiny glass vase of sea salt to remind us that stories of hope and peace can flavor our lives and this world if we’ll make time for them. And that sometimes it’s good for the soul just to leave everything behind for a few days and March to the Sea.

[Last Sunday afternoon, Wayne and I and son Kip re-traced a good part of that Salt March to the Sea, and we talked about that “back in the day” happening. This time we were in the car, on a windy, rainy/snowy winter day. I took my journal along and read some of the details, and felt again that it was a good thing to do. A renewing thing to do. The world is stumbling today. Can telling and re-telling the stories of nonviolent problem-solving help us to understand that it can be our way forward? I think so. – Kathy, February 28, 2022.]